Campbell Lodge has its humble beginnings in 1892 when on May 31st then MWGM A. B. Campbell (the lodge’s namesake) made 21 men at sight in Norfolk and gave them a dispensation to meet as Campbell Lodge, U.D.  The first officers of this newly formed lodge were as follows: 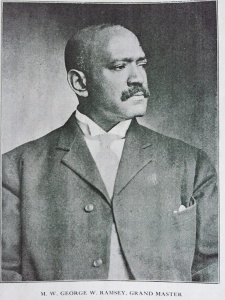 From its inception Campbell Lodge has given birth to some of the jurisdictions most esteemed Masons to have ever donned the illustrious purple & gold of the fraternity.  In 1897 Bro. Joseph H. Spiller and Bro. George W. Ramsey became the lodge’s first appointed Grand Lodge Officers.  Bro. Spiller was appointed as the Grand Pursuivant under MWGM Americus M. Jones, and Bro. Ramsey was appointed to the position of DDGM for the 1st Masonic District.  In 1900 Bro. Ramsey also had the distinction of becoming the lodge’s first elected Grand Lodge Officer when he was elected to the position of Senior Grand Deacon.  He would later go on to serve as Grand Master from 1908 – 1910.  The lodge has since had two other members go on to occupy the Oriental Chair in the Grand East with Bro. Charles C. Crawford, Jr. serving as Grand Master from 1986 – 1988 and Bro. Curtis S. Vaughan, Jr. serving as Grand Master from 2006 – 2008.

Along with its ability to produce astute Masons, Campbell has always striven to preserve the ritualistic work of the craft.  This is evident in the number of members who have served on the Grand Lodge’s Committee on Work as well as those who have served as Right Worshipful Grand Lecturer of the Eastern District. In 1919, Bro. John W. Tyler became the first Campbell Brother to be elected to the position of RWGL of the Eastern District.  He held this position for eight years serving until 1927.  The lodge’s commitment to sound ritualistic work was so deep that in 1925 Bro. Throman Clark (served as DDGM of the 1st MD from 1918 – 1920), also a member of Campbell, ran against Bro. Tyler for Grand Lecturer.  Bro. Tyler, being the incumbent, won the election.

The following Brothers have also had the distinction of serving as Grand Lecturers of the Eastern District:

In his 1892 address, Grand Master A. B. Campbell stated that “it is my opinion that this…lodge will…be one of the best lodges in our state.”  This has proven to be true as Campbell continues to be the shining example of that light which we as Freemasons strive to emulate.